The Flint Hills stretch north to south across east-central Kansas, and down into Oklahoma where they are called the Osage Hills. The Greater Flint Hills landscape is the largest expanse of tall grass prairie remaining in North America; roughly two-thirds of what remains is found here. This ecologically significant landscape takes its name from the flint (chert) that is scattered about in many areas. The underlying chert and associated limestone spared much of the landscape from the plow. While ill-suited to tillage agriculture, the landscape is touted as one of the most productive native grasslands in the World. Since the 1850s, the Flint Hills have fattened transient cattle, first via cattle drives and later by rail. The practice continues today, with yearlings trucked in to graze recently burned pastures in the spring. A common practice is intensive early stocking, with double the cattle for half the grazing season. After cattle are shipped off in July, the land is rested until the following spring when it is burned in preparation for cattle. The compressed burning and grazing schedule lends itself to cooperation among neighbors.

Over a decade ago, a core group of landowners and ranchers who helped establish the Tallgrass Legacy Alliance (TLA) realized that they needed to partner with other stakeholders (agencies and NGOs) to better address threats to the biological, economic and cultural integrity of the Flint Hills. The emerging coalition sought help from other producer-driven initiatives, like the Sand Hills Task Force in Nebraska. There was also a rancher exchange between TLA and the Malpai Borderlands Group, a collaboration formed a few years prior in New Mexico and Arizona. TLA later hired a coordinator and partnered with the Kansas Grazing Lands Conservation Initiative (GLCI). TLA efforts were also leveraged and combined with organizations from other Kansas native grasslands, including the Red Hills and Smoky Hills. 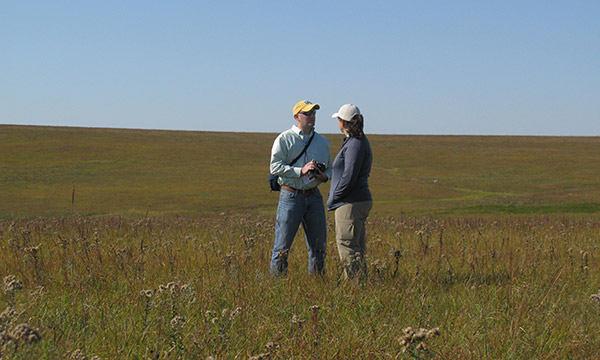 Flint Hills Management Model
Perhaps more than most landscapes, the management model in the Flint Hills is based on relationships and “partnering up”. Historically neighbors worked together across property lines to accomplish work that required partnerships such as prescribed burning and gathering large numbers of cattle in short periods of time. More recently a broad array of public agency and nonprofit conservation partnerships have become key on the landscape.