Lack of a unified voice for South Dakota Grasslands

Nationally, landowners and others interested in privately owned grazing lands formed the Grazing Land Conservation Initiative (GLCI) in 1991 to promote and support technical assistance to the owners of our nation’s grazing lands. This led directly to the creation of the South Dakota Grasslands Coalition to serve as a voice for South Dakota grasslands. Prairie managers in South Dakota recognized that the grassland habitats made up the majority of the state’s land mass and were an important economic as well as ecological resource. As landowners developed the coalition, public agencies realized that the coalition, as a landowner-led and respected organization, could be a great asset to agency led outreach efforts by communicating with other landowners as peers. The South Dakota Grasslands Coalition has embraced this role and continues to be effective communicating with agencies, policy makers, and landowners. The group’s current vision is to be a partnership of people working to voluntarily improve grasslands for the long term needs of the resource and its populations. Given the appropriate tools and training, grassland managers will be better prepared to make cost-effective and environmentally sound management decisions.

The initial partner of the coalition was the USDA-Natural Resources Conservation Service (NRCS) due to that agency’s deep involvement in the formation of GLCI. Soon after that, the group developed a relationship with South Dakota Department of the Environment and Natural Resources through an Environmental Protection Agency (EPA) grant to work on the relationship of functional grasslands and high water quality in selected watersheds statewide. South Dakota State University (SDSU) Rangeland Extension has also become a major partner. Other partners include the U.S. Fish and Wildlife Service – Partners for Fish and Wildlife Program, South Dakota Game, Fish and Parks, and numerous non-governmental organizations.

The South Dakota Grasslands Coalition has become a very effective voice for the native grasslands of the state and through their leadership has contributed significantly to a growing appreciation for grasslands at the national level. In addition to funding from NRCS and EPA for educational programs, the group’s cooperative effort with SDSU Rangeland Extension has resulted in additional rangeland technical assistance as well as enhancing outreach opportunities for both the extension service and the coalition. More recently the South Dakota Grasslands Coalition partnered with South Dakota Cattlemen, South Dakota Association of Conservation Districts and the Farm Bureau to establish the South Dakota Agricultural Land Trust to partner with landowners looking to conserve working lands for the long term.

To learn more about the South Dakota Grasslands Coalition visit them on the web here. 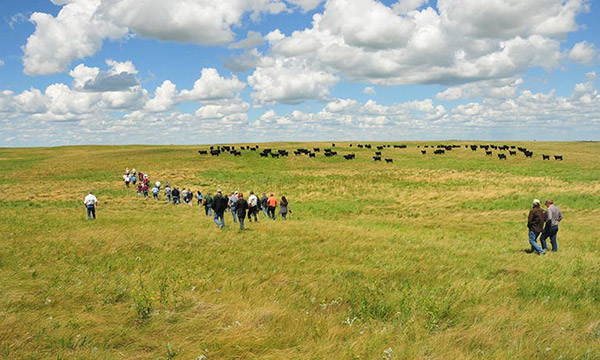 Over 130 landowners, agency staff, and other conservation partners attended Private Lands Day in South Dakota in October 2011. These annual gatherings have been convened by private landowners and the U.S. Fish and Wildlife Service – Partners for Fish and Wildlife Program since 2008 and were key to the establishment of Partners for Conservation (Partnerscapes) as an organization in 2010.