The Grouse Creek watershed in west Box Elder County, Utah is bounded on the west by Nevada, on the north by Idaho and on the south by the playas and salt flats of the Great Salt Lake. The small community of Grouse Creek shares its name with the watershed. Elevations range from 5,500 to over 9,000 feet and habitat includes sagebrush steppe in the mid and lower elevations and mixed conifer forest in the mountains. Annual precipitation is less than 12 inches with the bulk of moisture coming either as snow or as rain during April and May. Land ownership is about evenly split between private and publicly owned land, mostly administered by the Bureau of Land Management (BLM). The primary land use is cattle ranching although some sheep remain.

West Box Elder County, with a low population and long history of ranching, stands in stark contrast to the eastern part of the county that is highly urbanized and includes portions of the greater Salt Lake City metro area. The western part of the county includes some of Utah’s most important habitat for Greater sage-grouse, a species that is of intense local, statewide, and national interest. Some of the primary issues identified in the region include juniper invasion of midslope habitats, weed management and invasive species, conservation of wildlife species of concern, and economic development via increased tourism.

The West Box Elder Coordinated Resource Management (CRM) Group is comprised of public and private stakeholders in the landscape who share an interest in the ecological health and sustainability of human communities in the service area. The group completed their new coordinated resource management plan in early 2013. Much of the recent work of the CRM group has focused on addressing habitat issues for sage grouse while simultaneously improving rangeland health and livestock forage production. This focus has brought numerous new partners into the watershed including university researchers and additional resources for the group’s landscape scale juniper control efforts.

Participants in the CRM include landowners; representatives of county government and county agencies, and the conservation district; state agencies such as the Department of Natural Resources, Division of Wildlife Resources and Division of Water Resources; universities including Utah State University and USU-Extension; and federal agencies such as the BLM, U.S. Forest Service, USDA-Natural Resources Conservation Service, and the U.S. Fish and Wildlife-Partners for Fish and Wildlife Program.

In addition to completing their coordinated resource management plan, participants in the process as well as other local landowners have been very active in implementing juniper control with some 20,000 acres of private land treated in recent years. The university partnerships are yielding extremely important research related to Greater sage-grouse conservation. The success has not gone unrecognized, as the West Box Elder CRM Group was recognized in November 2013 by the Public Lands Foundation for its outstanding work developing and implementing landscape management projects in northwestern Utah. In 2016, the CRM was presented with the Sage Grouse Habitat Stewardship-Collaborative Award from the BLM as an ideal example of a community-based land stewardship organization that is committed, engaged, and active across land ownership boundaries. 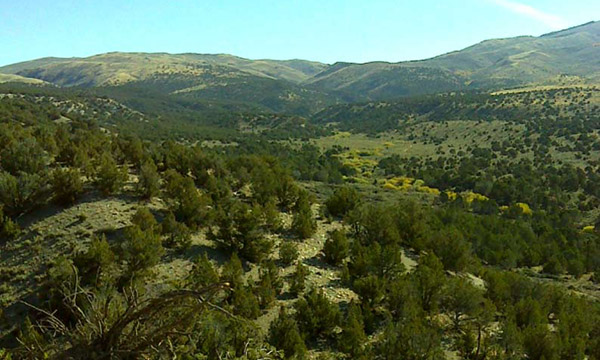 Photo: Grouse Creek Pinyon Juniper Work
The middle elevations of the Grouse Creek watershed are dominated in many areas by woody species (Pinyon-Juniper Community) which negatively impacts both forage productivity and wildlife habitat. Grouse Creek and western Box Elder County, Utah represent some of the most important sage grouse habitat in the state. Landowners in the area have implemented range restoration projects through juniper control, reseeding, and prescribed fire on thousands of acres.