The longleaf pine ecosystem originally encompassed over 90 million acres, stretching from southern Virginia to northern Florida and west as far as eastern Texas. This region of the United States receives more lighting strikes than anywhere else in the country and the longleaf ecosystem evolved as a fire-dependent ecosystem with natural fires occurring every 2-3 years. Longleaf pines are the most fire-resistant pine tree, so this regular burning cycle produced an open landscape with large 500-year-old trees and an understory dominated by wiregrass and bluestem. The longleaf pine ecosystem is one of the most biologically rich systems in the world, second only to tropical rainforests. There are around 600 species that call the system home including various plants, wildlife, and insects. The understory within longleaf pine forests are particularly important playing host to the grasses, pollinator plants, trees, bushes, and legumes that provide for both wildlife and insects.

The longleaf pine ecosystem is one of the most imperiled in the entire country – from the original 90 million acres, it is estimated that only 3 million remained by the early 2000’s. Coupled with development and conversion to farmland and other uses, fire suppression in the ecosystem has made a dramatic impact. Without fire, hardwoods begin to grow in the understory, shading out grasses and legumes and hindering the production of viable seed. With the loss of habitat has come a loss of native species; 31 species in the longleaf ecosystem are listed under the Endangered Species Act including the indigo snake and the red-cockaded woodpecker. In addition, there are a number of candidate species, including the gopher tortoise in the eastern part of its range and the striped newt.

Because of the dramatic decline of this once vast ecosystem, partnerships have developed across the southeast to benefit the longleaf pine system. Much of the region is privately owned, so the Natural Resources Conservation Service has developed the Longleaf Pine Initiative to provide resources for private landowners looking to restore longleaf pines. In addition, NRCS has established Working Lands for Wildlife partnerships for the gopher tortoise to encourage additional efforts to improve their habitat.

Just planting longleaf isn’t the only answer, active burning boosts the understory habitat and maintains diversity – encouraging active habitat management requires significant collaboration and engagement with landowners. PFC Board Member, Reese Thompson is a multi-generational tree farmer growing pines in Georgia. He recognized the importance of the longleaf ecosystem and began collaborating with the Longleaf Alliance, NRCS, and other partners to implement active management – in particular regular burning cycles – on his property. He is most proud of the resurgence of indigo snakes and gopher tortoises, as well as the thousands of species of pollinators and native vegetation that have returned to his landscape. It takes a long-term commitment for landowners to play an active role in the conservation of this imperiled landscape. As Reese emphasizes to his own children, landowners need to recognize that it doesn’t just take 100 years to grow a 100-year-old tree, it also requires the commitment of two or three generations.

Partnerships have been extensive throughout the longleaf pine ecosystem, starting with federal support through the Natural Resources Conservation Service and U.S. Fish and Wildlife Service as well as state natural resource agencies. In addition, a diverse group of conservation partners have also been engaged including the National Fish and Wildlife Foundation, Longleaf Alliance, National Wild Turkey Federation, Tall Timbers Research Station, Orianne Society, and many more.

Thanks to these partnerships there are now about 4 – 4.5 million acres of longleaf pines with a goal to have 8 million acres by 2025. Thanks to the continued collaborations, there is growing awareness of the challenges and increased engagement across the landscape. 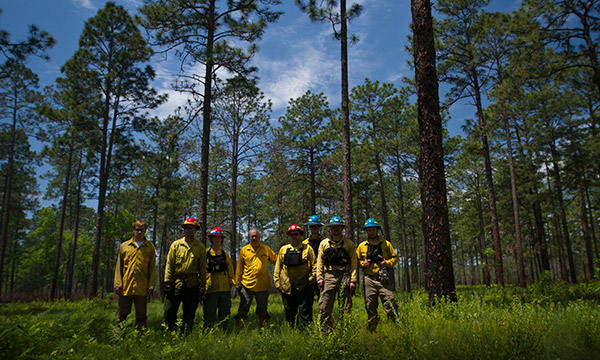 Photo: Two generations of landowners and staff from two partner organizations on a prescribed burn.