The shortgrass prairie of southeast Colorado includes large expanses of grasslands and smaller amounts of plains riparian habitats along the streams and rivers. Wildlife species that occur here include pronghorn antelope, swift fox, black-tailed prairie dog, and mountain plover as well as neotropical migratory birds, native plains fishes, and numerous reptiles and amphibians. It is also an area of small communities, large cattle ranches, and significant farming operations particularly in association with the Arkansas River Valley.

The catalyst for the Karval community came about as a result of a lawsuit in 2010 forcing the U.S. Fish and Wildlife Service (USFWS) to reinstate a proposed rule to list the mountain plover under the Endangered Species Act. In an effort to address concerns without listing the species, individuals within the community sought to engage the USFWS to demonstrate that their landscape was providing habitat for mountain plovers and that the birds were more numerous than had been estimated.

After they became aware of the issues related to the potential listing, ranchers in the landscape were very concerned about how the listing of the mountain plover might impact their community, their operations, and their way of life. As a response, some individuals in the community took a leap of faith and began to cooperate with researchers to determine how many of the birds were using their ranches and what habitat they were using. As this relationship developed, these ranchers met more conservation agencies and partners who saw the broad diversity of shortgrass wildlife species that utilized the ranches and partnerships began to emerge. Eventually, the data researchers collected indicated that plovers were doing much better than anyone had imagined on the Colorado ranchlands. It was also discovered that other shortgrass wildlife species of concern were thriving. Eventually the USFWS determined that a listing was not warranted. Also as a result of the plover research, the Karval Community Alliance was formed. The Alliance now hosts an annual Plover Festival where birdwatchers from all across the country are hosted on local ranches and are treated to a weekend of plover watching and other activities.

Ranchers engaged with the Karval Community Alliance have partnered extensively with the USFWS-Partners for Fish and Wildlife Program, Colorado Parks and Wildlife, Bird Conservancy of the Rockies, and other local, state and national organizations.

Research conducted as a part of the effort indicated that the plover were doing better than the agencies and universities had suspected, many conservation partnerships were formed, the Karval Community Alliance was established as was the Plover Festival. The group continues to work on a school curriculum called Ranching and Wildlife which provides both local and urban students a learning experience that focuses on the intersection of ranching and ecology in the shortgrass prairie. 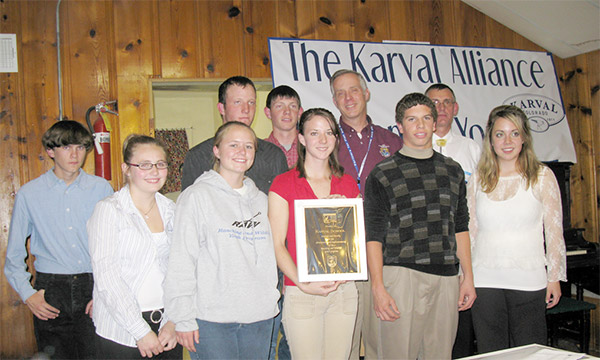 Photo: The Next Generation
The Karval Community, Karval school, and the Colorado Parks and Wildlife Department use a Ranching and Wildlife (RAW) curriculum to instruct both rural and urban high school students on ranching and wildlife conservation and how they work together in southeast Colorado.